The Giver: A community builder in Abbotsford’s homeless community

A WAY HOME: Harvey Clause wants to build a life helping those around him

“My mind’s a bit like the clouds out there right now,” Harvey Clause says, gesturing toward the fog hanging low over Gladys Avenue, when asked how he’s doing. “It might clear up this afternoon,” he adds with a characteristically anxious laugh.

It’s 8:30 a.m. on a Wednesday, and Clause is about to head into the Salvation Army for breakfast shortly after emerging from a night at the seniors’ winter shelter. 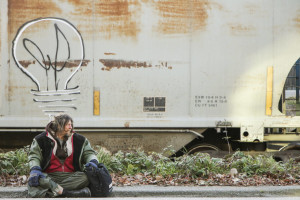 Clause has the appearance of a tired man. Duvet-like bags hug shimmering eyes, veiled by stray locks of hair. His padded helmet of hair reaches down nearly to his shoulders – though it’s hard to tell exactly where his shoulders are below several layers of leather and sweaters.

But looks can deceive. When he gets worked up, Clause speaks with passion. As one friend describes troubles getting into a shelter on a rainy day, the 58-year-old speaks as though at a podium. He gets so worked up that he has to sit down.

Clause appears to take his energy from those around him, seemingly in contrast with his layers of protection, from his armour of clothing to his veil of hair. True to his name, Clause is a giver.

He extinguishes a cigarette and he heads inside the Salvation Army, greeted warmly by everyone along the way. When he’s asked for a smoke, he sends a cigarette their way and declines the loonie in return, even if it’s his last one.

It’s not just little things, though. Clause has dreams of building his community up through peer support.

He pins his community spirit on lessons learned through raising five children: When you offer respect, you build trust. When you build trust, you’re able to work with that person, rather than in spite of them.

He applies this logic to how society can help to lift people out of homelessness: “I know some of these people have great talents. You’ve just got to find it. And then, if they’ve got to have job-transferable skills at that point but no staff position, tell them what else they might be good at. Don’t put him down because he’s not doing it.”

Abbotsford’s homeless population is Clause’s family. That much is obvious as he hangs around on Gladys Avenue – effectively the heart of the community where the food bank, hot meals and shelter beds are located.

And as they coalesce under covered space to take refuge from the West Coast rain between meals, a community that is often dispersed through the city comes into focus.

Clause, one of the homeless advocates at the former tent city in Abbotsford and currently on the steering committee of Drug War Survivors (DWS), has his own critiques of the tent city, which was dismantled in 2014. For one, it was lacking structure.

“But if we have some place where we can go and it’s in a spot that’s controlled by a group, like our Drug War Survivors group, maybe, I think we can go far with it,” Clause says. “I think that it’s a chance to prove ourselves, prove that maybe these people aren’t worth nothing.”

Since the dismantling of the tent city, Clause says there has been a negative impact on the local homeless community.

“We were just starting to form community and friendships at the time. And when they broke us all up, people started to die more frequently. It’s noticeable. They might not have noticed, but I did. And so did other people.”

Harvey Clause has been homeless for 18 years.

In a past life, Clause ran a kitchen and was a radio DJ in Calgary. He got into radio work after going to a dance function at a church, where he was inspired.

But when he and his wife were about to split up, he wound down his work to take care of his kids. That drew him into a need for income assistance. When he was 40 years old, after his kids grew up and were out of his house, his mother died – and that was when everything started to fall apart.

“When my mom died was the first time I used hard drugs,” Clause says. “It hit hard. She was the only family member that I had other than myself and my kids after me. And I never dealt with it, because I didn’t know how to deal with it. Death was something I’d never dealt with.”

Harkening back to that experience, Clause points to the impacts of losing connections with the people around him on his own path toward homelessness and addictions, and how that’s not uncommon among his peers.

“The care for themselves went out the window at the same time.” 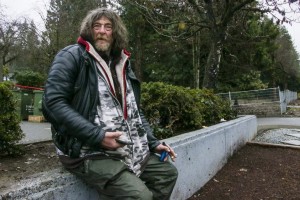 “I’m looking at what I’m doing with DWS as serious. I want to fix this, or try to create a program to help fix it,” Clause says, speaking of homelessness and addictions.

Though he enjoyed working as a DJ, Clause says he’s now more interested in advocacy, where he’s been entrenched now for years. And that’s where he says he hopes to get full-time work and eventually be able to afford his own place to stay.

As well as being on the DWS steering committee, Clause does work to support his peers. His experience is a growing trend in homeless advocacy work. Those with lived experience, the logic goes, are often the ones best equipped to not only help their peers, but also to find solutions.

With a pulse on the community, Clause can point out how a solution from on high that sounds good in the legislature may not look good on the streets.

And policymaking can be informed by stigma, albeit decreasingly so over the past decade. Clause is fully aware of how the homeless are often viewed beyond their own community, views that can turn into violence.

“You can be poor and innocent and get hit by a soup can out there, like I have been many times on the streets. We deal with all those things,” Clause says.

He says that type of violence has simmered down in recent years, but it’s hard to say whether that’s because the homeless are less visible than during the tent city years or because attitudes have grown softer. Perhaps some evidence for the latter: Clause says he’s seen “more generosity out there than I’ve seen angry people” lately.

But the vitriol toward the homeless is still more reason for the community to band together.

Having a community around him, with which he can be involved and whom he calls his family, has helped Clause to improve his life in recent years. For him, rebuilding connections to the community around him is a way to regain his own stability in life.

“To fight my way out of that depression, I do what I do, and I have to get involved in what I’m doing. That’s everything,” Clause says.

Community in any setting generally means safety, and, for the city’s most vulnerable population, it’s no different.

“We even take care of the people who steal from us. We forgive them faster than society forgives people. Because they’re human, right?”