I found ‘The Blacktongue Thief’ on a list of interesting 2021 scifi/fantasy and a check revealed the Fraser Valley Resource Library had a copy. 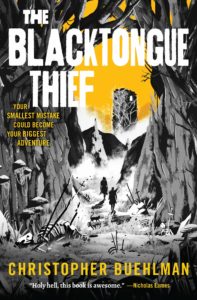 The promotional quote from Nicholas Eames on the front cover – “Holy hell., this book is awesome” – did give me pause as hyperbola oft portends an unsatisfactory read.

Needing a change of pace between Bujould’s novellas in Pendric’s Travels [thanks to Baen for publishing three books collecting all of the Pendric tales] I chose to try The Blacktongue Thief.

The Blacktongue Thief may not have been awesome, only a double handful of novels truly qualify as ‘awesome’, it was impressive writing/storytelling that impelled me to consume the novel.

The writing was so smooth and flowed forward so well that I suspect that Buehlman could have turned disjoined elements into a novel where it wouldn’t be until you finished reading that you become aware of the lack of story.

Fortunately Buehlman’s world building and characters interesting and develop in complexity as the novel progresses. The plot is a relatively straight-forward quest that weaves interconnecting threads in as the story progresses that change what we think of the world as the threads reveal new information, connections and complexities.

Buehlman’s writing makes narration by the black tongued [it is a racial trait] thief work. It also makes the world, described in Vanessa Armstrong’s review [https://www.tor.com/2021/05/25/book-reviews-the-blacktongue-thief-by-christopher-buehlman/] at tor.com as ‘grim/dark fantasy’, ‘savageness that pervades this world’ and ‘everyday brutality’, an integral part of the story revealed as the novel progresses and our understanding of the components of the world develop.

As the novel progresses and threads are added and woven into the story it becomes clear that the true threat is not the invading giants; the straight-forward quest is revealed to actually be only the first step on the path to saving the world.

The novel concludes quite satisfactorily with the successful conclusion of the straight-forward quest that served to move the story, and our developing awareness of the world Buehlman has created, forward.

For an avid reader the most satisfactory aspects of the conclusion are that 1) the novel was extremely engaging world building and story telling; 2) the conclusion leaves  the characters and world poised to pursue saving the world; 3) The Blacktongue Thief holds the promise that any novel(s) continuing story will make excellent reading.

The Blacktongue Thief by Christopher Buehlman 4.5/5.0