I was sitting at Curtis Tire on a busy morning waiting for my tire to get fixed when the video from the man who was filming the homeless camp in Abbotsford was broadcast on BC1 – Global BC’s 24 hour news channel.

END_OF_DOCUMENT_TOKEN_TO_BE_REPLACED

As noted earlier – in thinking about the state of Canada’s finances and the economy, it became clear that as difficult as I found it to comprehend it was possible, even likely, that Stephen Harper and the Conservatives in fact see themselves as doing a good job – telling themselves that Canada’s finances and economy would be in much worse shape under any other party’s management. 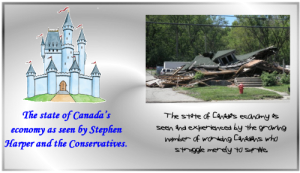