The ongoing business as usual behaviour of Abbotsford’s current crop of politicians and management evidence that, in the name of accuracy, we need to rename city hall Fawlty Tower.

This renaming is needed to reflect that the decisions and behaviour of council have gone well past ‘Comedy of Errors’ into ‘Farcical’ making it appropriate to rename city hall after the John Cleese BBC television series Fawlty Towers – a series where chaos is the fallout from the foolish mistakes of intelligence-challenged characters. 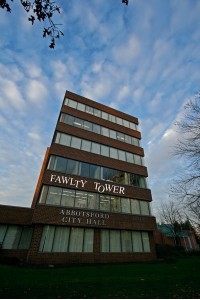 Shouldyou harbor any doubts as to the validity of the use of ‘intelligence-challenged characters’ remember this is the same basic council who thought that awarding the contract for the work on Centennial Pool to a company that had never built/poured a pool of any type was a good idea; in spite of the deadline imposed by the May start of the Abbotsford Whalers season and the fact Abbotsford council did not let the contract until well into the fall rather than during the summer which would have permitted construction to start several months earlier at the time Centennial Pool ceased operations for the season.

When some citizens questioned council as to the wisdom of awarding the contract to a firm that had never built a pool tank council, as is their wont as they stumble from misadventure to debacle to calamity to disaster, claimed they were saving the taxpayers money, while issuing assurances that council knew what it was doing and asserting the ‘naysayers’ knew nothing about the matter and promising there was nothing to worry about.

This total lack of pool construction experience is why no one with any common sense was surprised when there were, and continue to be, problems with Centennial Pool’s construction.

Given council’s historic aversion to giving consideration and/or thought to questions from taxpayers that threaten to inject reality into council’s ‘don’t worry, be happy’ world, the cancellation of question period was always a matter of when not if. Indeed council has made it very clear that their preference would be to conduct all, not just most, of the city’s business behind closed doors and away from public scrutiny and questions. Currently council only conducts the business it has to in public.

It is likely council’s long record of construction boondoggles as well as massive cost overruns, multi-million dollar losses instead of profits, multi-million dollar subsidies to purchase a professional hockey team for favoured citizens, growing water shortages, onerous property tax levels and so on, that gives rise to the need to cite any success.

This would explain Councilor Smith commenting on the matter of ending the public’s time to ask questions at the end of council meetings.

“Ending the public’s right to ask questions at council meetings is, according to Smith, not an attempt to muzzle the public.”

While ending the opportunity for citizens questions after council meetings was not a failed ATTEMPT to muzzle the public but in fact a SUCCESSFUL muzzling of the public, this is not a ‘success’ to be proud of.

Speaking of wondering ‘do Abbotsford’s politicians ever listen to what they are saying’ it was certainly interesting, in a dumbfounding way, listening to George Peary comments.

And no, I am not referring to his switch from “I’d far rather the community tell me what the issues are” during the municipal election to “Council does not have to justify it’s decisions to any one individual. That’s what we have elections for every three years” after being elected and in power.

I was referring to the sight of Abbotsford’s Mayor Peary on the television news informing potential businesses, investors, residents and any other interested parties that Abbotsford’s water supply infrastructure is inadequate to the point that, despite a much rainier spring and a much latter than normal beginning to warm summer weather, that water rationing is required in Abbotsford in order for the Abbotsford Fire Department to have sufficient supplies of water to fight fires.

The fact that Mayor Peary’s revelation Abbotsford lacks the water supply to fight fires without water rationing may deter potential businesses and residents from moving to Abbotsford has both a positive and a negative side.

On the negative side is the reality that with the financial quagmire council has sunk the city into, the loss of the development fees, business and property taxes as a result of the public acknowledgement of Abbotsford’s lack of sufficient capacity to meet the water needs of the city, may well cause the city to run out of money and into bankruptcy.

On the positive side slowing growth will reduce the growing strain on Abbotsford’s inadequate water delivery infrastructure and delay the need to impose restrictions or limits on how much water a household can use period; buying time to do a proper job of bringing Abbotsford’s water delivery infrastructure to a capacity sufficient to meet current and future water demands.

I know council will undoubtedly continue to insist that council knows what it is doing, there is no problem with capacity and there is no water problem, much less crisis, in Abbotsford.

Personally – when you have water rationing because you need to make sure you have enough water to fight fires and you are continuing to add demand to the system (development) you definitely have a problem; when the Abbotsford Mission Water & Sewer Commission is just now starting to consider options for expansion of the water delivery infrastructure, while you are already rationing water to ensure water to fight fires and given the lead times in planning then building infrastructure, you may not be in a crisis yet but that is the direction the city is heading.

What would the water situation currently be if the weather had not been wetter, cloudier and cooler than normal?

At what point does our inadequate water delivery infrastructure become a problem according to council? When it is not just charity car washes that are banned but the use of backyard pools, including children’s blow-up pools? Or is it when there are limits on how much water a household can use for bathing, cooking, cleaning and drinking? Is the reason council is planning the economically unjustifiable expense of installing individual water metering not just to allow them to surreptitiously raise water bills but to be able to monitor the amount of water each household uses when limits on household water usage need to be imposed?

Is the definition of a water crisis for Abbotsford’s current council when a home or business burns because there is not enough water and water pressure to supply sufficient water for the fire department to fight the fire?

The need for increased capacity in Abbotsford’s water infrastructure did not suddenly appear but has been a known issue/need for years. The reason that there are no plans on the table, much less a timetable to address water delivery capacity and avoid severe water rationing is that council’s priorities are council ego projects (international gardens, art galleries, subsidizing professional hockey team ownership for favoured citizens) first rather than the infrastructure needed by the City of Abbotsford to support not only its current population but to support future growth.

Which is in keeping with council’s apparent lack of concern with the effect increases in the city’s debt and the property tax increases associated with capital spending has on Abbotsford taxpayers; after all why would council want to have their planning in place in time to be able to line up the maximum contributions from the federal or provincial governments. Council certainly wouldn’t have wanted to been in position to take advantage of the recent federal government $billions$ for stimulus spending on infrastructure.

What would cause council to exert itself to maximize funding from senior levels of government when they have the opportunity to achieve record levels of debt and property taxes by having Abbotsford’s taxpayers foot the entire bill?

Obviously overpasses to provide better access to council’s ego project, the black hole known as the Entertainment & Sports Centre, are more of a priority than drinking water – at least for council.

While on the subject of council and its lack of leadership, why is it that with a watering ban in effect for others in Abbotsford, the city is wasting thousands of litres of water per day (evaporation) by running city hall fountains and the waterfall at John Smith’s million dollar garden?

But then if leadership and proper priorities existed on council, citizens would not find themselves wondering about why all that money is being spent repairing and repaving the roads around city hall, which are quite driveable (in superior shape by Abbotsford standards) when roads around Abbotsford (but not near city hall, nor I suspect councillor’s homes) that pose a threat to vehicles forced to use them continue to worsen in impassability.

Considering that what we are speaking of here are council’s behaviours over only the past two weeks, such behaviours emphasis the reality that, beyond any shadow of a doubt, city hall is Fawlty Tower.