With Media attention focused on the bottom line, cutting costs and survival and in light of the reality that the biggest, most pervasive lack of truthfulness by politicians is not commission [telling a lie] but omission [not speaking of something] a desirable quality of life for BC citizens is entirely in the hands of BC citizens themselves and dependent on citizens practicing caveat emptor, paying attention, being observant, diligent and investing time in thinking and doing their own homework.

Case in point: the NDP/Green stealth modus operandi to change the electoral system to proportional representation. The NDP/Green collaboration is so focused on the strategic advantages of a proportional representation electoral system in terms of forming the government and holding onto power [see Appendix A] that the other effects and consequences apparently do not matter to them. 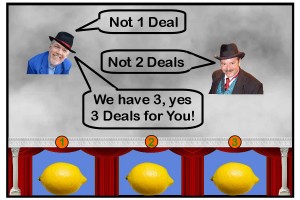 No matter what the haphazard behaviour of the collaborators, the Green and NDP parties, with regard to proportional representation suggests, any electoral reform, any change to our electoral process is a major change and as such warrants utmost care and an 80%+ public approval of any change that will occur.

Talk about setting the fox to guard the henhouse…….given that we are speaking of how we elect politicians it is a ludicrous concept to anyone not a politician to give non-binding ‘direction’ to politicians and let them design the system they get elected by.

If everyone was jumping off a bridge would you jump too? Or would you think the matter through. There is no excuse for allowing the politicians to bamboozle citizens into thoughtlessly jumping of the proportional representation bridge with them. 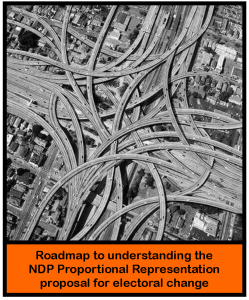 Although Canadians do have experience with the first past the post system self-preservation should cause them to read Dale Smith’s 2017 “The Unbroken Machine: Canada’s Democracy in Action” for the why’s and wherefores of our current electoral system and its history.

The current Canadian system of law and government traces its roots back to 1215 and the Magna Carta, which became the foundation for the English system of common law.

Great Britain shows no sign of rushing to join its European neighbours in using proportional representation, which may be a reflection of the diverse mix of Britain, Scotland, Wales and Northern Ireland.

In addition to cultural and ethnic diversity Canada is the second largest country [behind Russia] in the world spanning from Newfoundland to Vancouver Island and from Lake Ontario to the high Arctic with distinct geographical regions that have differing, competing interests; regions which are geographically larger that most countries in the world.

Setting fairness, as defined narrowly in terms of the distribution of seats matching the popular vote ignores the purpose of elections and fails to fairly reflect the importance of governance, governability, stability, prosperity etcetera as outcomes of the electoral process.

Even by the standard of the behaviour of politicians the attempt by the NDP and Green parties to change BC’s electoral process is so thoughtless that within their heedless headlong rush to secure the electoral advantage they perceive in proportional representation [see Appendix A] is both a joke and the proof that the single brain cell the NDP and Greens had shared has died of loneliness.

Humour and anencephaly aside, and despite any protestations of innocence, the violation of public trust by the NDP and Green parties on the matter of electoral reform is so flagrant that naming it malfeasance is not unreasonable. 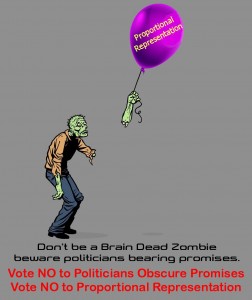 From any point of view other than the narrow view of tactical advantages in forming the government and political power the NDP/Green proportional representation proposal is a mine field of consequences and costs that demands a resounding NO vote.