Reading Terence Corcoran’s  ‘Milton Friedman is right, profit is a company’s only purpose’ in the National Post raises several questions for a creatively maladjusted polymath. The first being the 1970 economy versus the 2019 economy.

The question is which economy?

The one we want to exist or the economy that actually exists? There is a widening gulf between the two as the economy created by the fundamental economic changes that have taken place over recent years diverges from the economy that was created post WWII

To attack – or defend – Milton Friedman’s  September 1970 New York Times Magazine essay “The Social Responsibility of Business is to Increase its Profits” is to demonstrate a failure to grasp the breadth and depth of the fundamental economic changes that have taken place during the near 50 years elapsed between 1970 and 2019.

To any creatively maladjusted polymath the intriguing  question is whether Milton Friedman would recognize that ‘new economy’ is not a convenient label to apply to the changes that have occurred in the economy but reflects the reality that the economic changes are so fundamental and profound that the economy of 2019 is a new – now existing or appearing for the first time – economy.

Capitalism emerged in the 16th century..Between then [1500] and now [2019] the world, society, knowledge and technology have undergone numerous changes. These changes have profoundly affected how the economy has evolved over time.

As the economy evolves the fundamentals change until a tipping point is reached and you have a new economy that requires a change in actions and behaviours to manage the economy effectively.

When a new economy, distinct from the prior economy, comes into being the economy does not conveniently stop then restart to mark the need to change how we manage the new economy.

WW II triggered changes in the world and technology that resulted in fundamental economic changes and created a new, distinct economy in the post war period.

Since WW II the pace of change in the world, knowledge and technology and the effect of this change on the economy has accelerated.

The economy is neither separate from nor unaffected by the world. Profound changes in the world profoundly affect and change economic fundamentals.

The failure of governments, politicians, economists, pundits, Media and citizens to  recognize the far-reaching and acute shift from the post WWII economy that existed in 1970 to the economy of 2019 has left governments and business using tools that are appropriate to managing an economy that no longer exists.

Which left governments unable to effectively manage the economy and unable to plan and manage government finances. Placing core government services such as healthcare and education under increasing financial pressure while blocking government’s ability to address societal changes and challenges.

Without new thinking, policies, actions and behaviours the economy, government and the quality of life of Canadians are left in the hands of chance and fate.

One of the major consequences of not recognizing the nature and extent of the economy and the resulting inability to effectively manage the economy is the creation of a new economic and social class – the precarious.

The changes in the economy have pushed the finances of an ever increasing number of people to the edge of sustainability while making recovering from employment and financial issues much more difficult and therefore less likely. Leaving a growing number of Canadians precariously balanced on the edge of falling out [housing, employment, standard of living] and down..

The change in economic fundamentals, in the world and the increasing pace of change is having consequences that affect the stability of nations and the world..

Unfortunately the thought of a new economy distinct from the post WWII economy is an anathema to many because of the change it heralds.

The post WW II period was a time of growing standard of living for many. In a world of more, more, more the thought of a new economy and economic fundamentals that threaten more, more, more is unacceptable.

For economists, pundits, media the new economy and its changed economic fundamentals mean there are no tidy answers anymore; no history or theories to trot out. It leaves them needing to think creatively and outside the box.

For business it is not simply the need for changes in management. A new economy opens truisms and ;what everybody know’ that benefits business to examination and challenge. It also puts at risk corporate socialism – all the benefits that business now receive from taxpayers.

The new economic fundamentals, the new economy, is having profound effects on standards of living, government finances, sustainability.

We can choose how we handle the adjustment to the new economic reality or wait until it hammers us over the head with a 2 X 4. 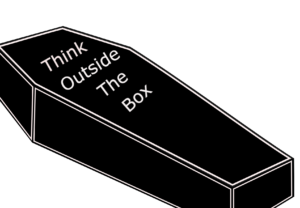