Life can be strange. Is strange if you are a creatively maladjusted polymath [but that is a conversation for another time]

I don’t make New Year’s Resolutions because I don’t want to set myself up to fail or to practice poor mental hygiene.

Not because I am against change or because I am perfect. After all, perfection is neither here nor there when you seek Awesomeness. 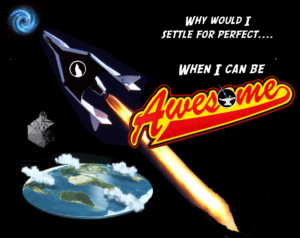 In the pursuit of attaining and maintaining Awesomeness my policy is to embrace any change that promotes Awesomeness.

For me, that often involves creating a ‘flag’ in my mind so that when a situation arises that involves a change I want to make, I focus my attention on the situation. Currently there are a number of behaviors selected for modification that are ‘flagged’ in my mind.

One could argue that as I am resolved to make a change I have made a resolution.

But resolutions are a slippery slope to not acting. If there is something needing change, if I am committed to change and if I want to be successful at changing I do not make a resolution to, at some unspecified point in the future, change but instead create an action plan to bring about the change.

Early in 2019 prolonged pain and incapacitation led me to conclude that I needed to be more aware that I have lived far closer to seven decades than two decades and modify my behavior accordingly.

As beneficial as the concept “If I had known I was going to live this long I would have been more careful” may seem, without building a time machine I have to live with the consequences of old injuries sustained injudiciously when much younger.

The years, and necessity, have taught me how to live with the pain and inconvenience of a number of youthful indiscretions. Randomly – fortunately infrequently – an old injury shifts just a shade further out of alignment and pain lights my eyeballs up.

In the past I had not let that deflect me from my planned itinerary but several outcomes, in particular the last outcome, experienced from this behavior involved prolonged pain and limitations imposed on my ability to move or find a position that was not acutely painful had me pondering the need to modify my behaviour in order to minimize my net pain and incapacitation.

On the verge of the Old Year becoming the New Year the twisted Irony the universe weaves into my life saw me waking to the torment of searing pain.

There was no horizontal position that provided relief from the agony, making sleep impossible. Exploration revealed the only relatively pain free position was sitting on the seat I use to work at my desktop. I suspect the effect of the seat’s lack of arms or a back has on my posture contributed to the pain reduction.

Fate had me scheduled to work New Year’s Eve. The Universe had me sitting at my computer faced with the question ‘To change or Not to change?”

Tempting me not to change was the fact that the old behavior, going to work, would be rewarded with $$$$. On the other hand I was sitting at the computer because any other position was acutely painful.

Greed versus Reasoned Self interest.

Fairness and consideration for others are behaviors I value and it being December 31 waiting to the last instant to phone and tell J that I was not able to work would have been extremely unfair and totally lacking in consideration.

So I opted to act in accordance with having seen close to seven, not two, decades and phoned J. Self knowledge, fairness, consideration and not setting myself up to fail allowed me to overcome temptation and inertia and be successful in consciously choosing change.

The decision to follow through on the planned change in behavior resulted in a significant reduction of pain and incapacity.

……. although the reduction in pain and time incapacitated does have me re-evaluating constructing a time travel device……