Driving past the rock garden located across the road from MCC’s thrift store on Gladys Avenue on Victoria Day, poetic justice put a cheshire cat grin on my face.

The consequences of the actions, and the failures to act, of the City of Abbotsford, resulted in members of Abbotsford’s homeless community taking up residence at this Monument to Ineptitude. 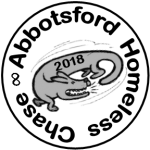 You may recall that this was the location of the homeless protest camp that, as a result of the court case brought by the homeless against the City of Abbotsford, enjoyed a long and highly visible life.

A court case where, both during the case and after the court had ruled,  mayor and council could not say what the $$$ cost to taxpayers was. Mayor and council did say the outcome was what they expected [hardly surprising in light of a decision by the BC Court of Appeals on a homeless case against the City of Victoria years earlier], but could not say why it was necessary to waste taxpayer dollars on a case where, as the City expected, the court ruled in favour of the homeless.

The ending of the court case led to the removal of the protest camp with the City quickly constructing a rock garden whose purpose seemed to be preventing another homeless camp on the site..

An action that had been successful – until now.

Unfortunately, while the costs of the court case and garden are in the past,. Pointless, wasteful, behaviour remains the SOP [standard operating procedure] of mayor, council and the City of Abbotsford when it comes to dealing with homelessness.

The City has no funds – or leadership – to undertake initiatives that are effective in addressing or dealing with the aspects of homelessness, but has unlimited funds to clean up the predictable consequences of the City’s lack of leadership.

The actions and behaviours by all levels of government on the issues of addiction, especially those addictions disapproved of and made illegal by governments [illegal drugs versus legal drugs such as alcohol], and homelessness is unaffordable, unsustainable and – at best – irrational.

How it came to pass that Abbotsford’s mayor, council and city hall are unable to grasp the physical reality that if someone is not Here they must be There; that there is no strange Twilight Zone for the homeless to disappear into when the City chases them from Here, I have no idea.

But based on their actions the mayor, council and city hall clearly fail to grasp that if the homeless are not Here they must – by the physical laws of this Universe – be There.

And so we are subjected to the spectacle of the City’s unending chase of the homeless from A to B to C to D to E to F to G to H and back to A. Behaviour one would expect to see in an old Keystone Kops movie, not from a municipal government in 2018. 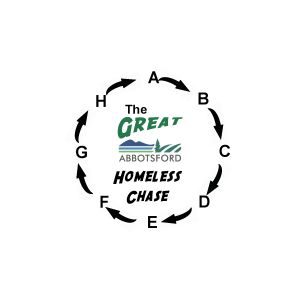 To stop endlessly recycling someone from homeless to housed to homeless and instead move them from homeless to permanently housed, you need to provide the supports and services they need to deal with the barriers and issues – to change – in order to achieve a level of wellness that permits stability in their lives and housing. 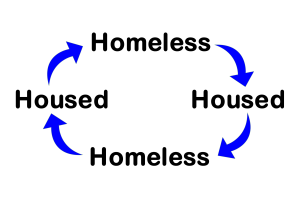 The ACTIONS of the City of Abbotsford increase the levels of stress, uncertainty and instability of the homeless, reinforce existing barriers and create new barriers. Actions harmful to the homeless and to the ability of the  homeless to achieve stable wellness and housing.

Actions beneficial to Got Junk? and the security company involved in the City of Abbotsford’s Great Homeless Chase, as well as to those organizations involved with BC’s homeless recycling programs. 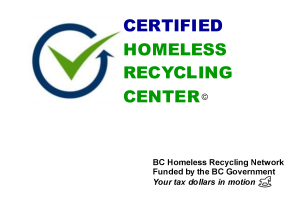 Actions detrimental to the homeless, to the community and to taxpayer’s pocketbooks. Actions that serve to keep the homeless unwell and homeless.

When it comes to actions it does not matter what our words say or what our intentions are. What matters is the consequences, the outcomes of our actions.

Despite what Abbotsford city council may say or may believe, their actions vis-à-vis the Abbotsford Homeless Chase are destructive and carry negative consequences on a number of levels.