The problem is not that letter writers Timi McIntosh and Thea Levesque of Abbotsford call upon the provincial government to raise taxes. The problem is that they failed to specify which taxes they want to raise and by how much they will raise those taxes.

Make no mistake, even though they never uttered the word taxes, the letters call for a significant tax increase.

The teachers demand the government spend $225 million on issues of class size, class composition, and staffing ratios – exclusively for the hiring of additional teachers. An increase of  $225 million per year.

The final big ticket demand by teachers is an additional $225 million retroactive grievances fund as a resolution to Justice Griffin’s BC Supreme Court decision that retroactively restored the stripped language from 2002. An increase of $45 million per year [$225 million ÷ 5 year term]

When you call upon the government to give the teachers what they want, you are calling upon the provincial government to increase taxes to cover the increased spending; spending [and taxes] that in this case totals more than ½ Billion dollars.

It is easy to state ‘I would pay more taxes for education.’

The fact that McIntosh, Levesque, the teachers and the Media avoid addressing the significant size of the proposed increase in provincial spending does not in anyway change the reality that such an increase must be paid for.

Unless McIntosh and Levesque are calling upon the provincial government to pay for the increases in teachers salaries not by raising taxes, but by cutting healthcare by the ½ Billion dollar cost of the teachers demands?

In these days of CAVEAT EMPTOR [or perhaps more properly ‘let the viewer/listener/reader beware’] days of shallow and incomplete coverage of issues by the media, citizens need to carefully and fully think through the consequences of actions called for by special interests and/or politicians.

I saw this container and sign in the MCC East Thrift Store: 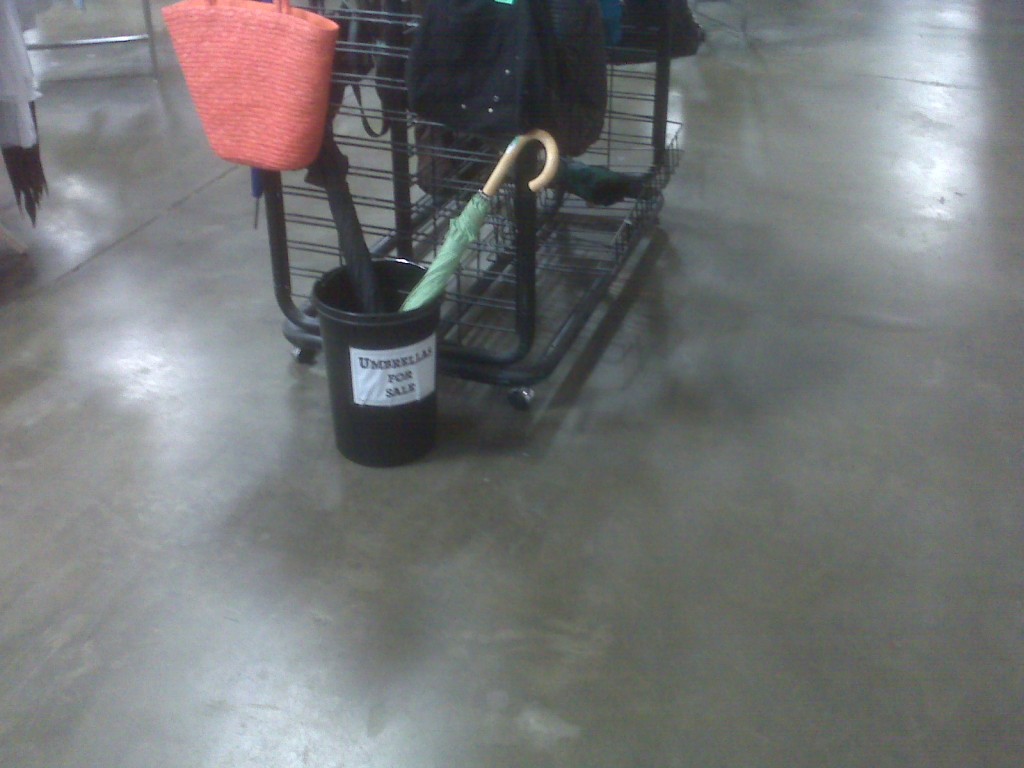 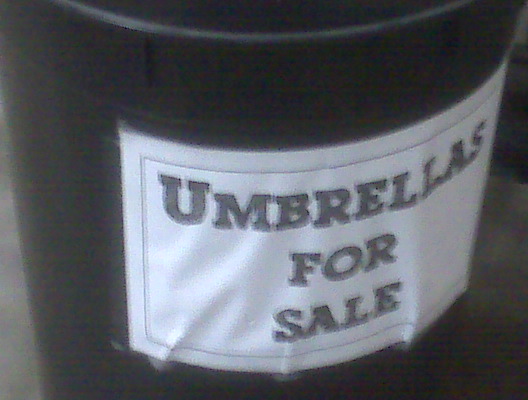 When I saw this I found myself wondering where in the store I would find the container of Umbrellas Not For Sale and why, in a Thrift Store, you would have Umbrellas that weren’t for sale?

Wouldn’t the presumption be that any umbrellas in a Thrift Store were for sale?

Why would you have umbrellas on the floor in a Thrift Store if they weren’t: For Sale?

Have you seen the ads for the ‘new’ vented beer cans, the ads that tout the vented cans as having a smoother pour?

That the addition of the vent is to give a smoother pour is BS, an evasion because the broadcast media would not be able to carry advertising based on the true purpose of the vent.

Smoothness is a side effect and acceptable as the excuse to advertise the speed……ahem, smoothness…..with which the can empties of beer.

You want a smooth pour you just adjust the angle of the pour to allow air to enter the can as the beer exits the can. Of course this course of action adds to the time it takes to empty the can of beer.

But time is a major consideration, a major factor to consider, when pouring a can [or cans] of beer down your throat in a Chug.

With the vent, it is no longer necessary to interrupt the flow of beer out of the can, to permit the entry of air into the can. The vent allows you to smoothly, quickly pour a can of beer down your gullet, without any need for the beer to touch lips, mouth or throat before hitting the stomach.

The need to resort to venting the can in order to promote, testifies to a creative bankruptcy.

Resorting to venting the beer can in order to increase sales and profit is cynical and corporate irresponsible behaviour.

Unfortunately it is likely to increase sales, as well as increase irresponsible drinking, unless…..

…..people drive home that this kind of irresponsible corporate behaviour is not acceptable by not buying any brand of beer that uses a vented can and notifying the brewer that you are not drinking their beer because of their irresponsible behaviour in encouraging irresponsible drinking, simply to fatten the already obscene  paycheques of corporate executives. I saw Global’s News Hour – or is that Shaw’s News Hour or Shaw’s Global News Hour – report about demands for an inquiry into the in custody [awaiting deportation] death of a Mexican woman.

My first thought was about how Shaw was wringing every last cent of worth out of this video, appearing as it does on all the local broadcasts Shaw labels ‘News’, plus constant repeats on Shaw’s cable channel BC1.

Helping to wring more value out of this video is the fact this video, with only slight modifications, has been used for several days now; significantly increasing Shaw’s ROI [Return on Investment] from this report.

ROI, advertising rates, profit center, contribution to the bottom line, the number of minutes of airtime the product can be used for and the cost of the product – the video – can be spread over are some of the corporate considerations that apply to decisions concerning the reports created and broad cast, to which the corporate conglomerate broadcast media applies the label ‘News’.

Under the current corporate conglomerate media structure that the Federal government and the CRTC allowed to come into existence, a Federal government and CRTC that were and are suppose to safeguard the interests of all Canadian citizens, not just corporations and the wealthy, what is labelled as ‘News’ bears only superficial resemblance to what was considered ‘News’ a few short decades ago. Just a few decades ago when the purpose of ‘News’ was providing information to keep viewers informed about significant events taking place and to provide  information to make informed decisions; ‘News’ for which standards were set out and were applied to the contents of the ‘News’.

Which has me contemplating filing a formal complaint about ‘False Advertising’ and ‘Misleading Labelling’ in order to force broadcasters either apply appropriate standards or to correctly label these broadcasts as “Pseudo News Hour” to reflect accurately the lack of content in the broadcasts and/or to force the same type of warning  to viewers as cigarette packaging bears for smokers.

Facebook turned 10 this week. Overall, has “social media” been a positive or negative development for civilization?

Given the race to the bottom, it’s all about me [ME, ME, ME] society that has been created by what is today accepted as leadership, politics, business and media…..

Given the behaviours of people created by that race to the bottom, it’s all about me [ME, ME, ME] society……..

It is a given that the benefits to be found in ‘Social Media’ will be overwhelmed by the Tsunami of malicious uses concocted by people.