The headline regarding St. Paul’s Hospital’s overdose prevention site was accurate [free from error or defect; precise; exact. b) careful or meticulous.] when it used touts [to describe or advertise boastfully; publicize or promote;].

I lack sufficient information, and/or access to information to determine the facts regarding the claim “first overdose prevention site inside a Canadian acute-care hospital’; in particular the exact definition of what constitutes or differentiates an ‘acute-care hospital.

Experience, evidence and facts provide indisputable evidence as to the inaccuracy of the claim ‘has so far saved dozens of lives”; at least for anyone who applies critical and reflective thinking.

END_OF_DOCUMENT_TOKEN_TO_BE_REPLACED

The CBC article “More than 7,000 lives lost to toxic drugs in 5 years — and this B.C. health crisis is only getting worse”  reminds us it has been more than five years since the toxicity level of illicit drugs reach poisonous levels. 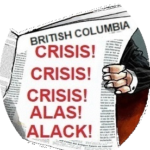 END_OF_DOCUMENT_TOKEN_TO_BE_REPLACED

The CBC article ”More than 7000 lives lost to toxic drugs in 5 years and this BC health crisis is only getting worse” noted five years have passed since the increased toxicity of the illicit drug supply resulted in a significant increase in drug deaths from illicit drug use that created a crisis in BC.

Five years after the crisis the Minister of Mental Health and Addictions, Sheila Malcomson, announced the BC government will formally request the federal government grant a province wide exemption from the Controlled Drugs and Substances Act.

Five people a day are dying because of the poisonous toxicity of the illicit drug supply and the BC government’s priority is to ensure people’s access to the toxic drugs that are killing them is not interrupted by legal issues.