My proportional representation voting package arrived the other day.

I will be voting NO as should everyone, including those who support proportional representation, because the process is so flawed that NO is the only option where there is any certainty as to the electoral process we are voting for. 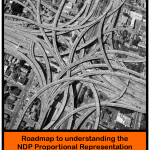 It is rather ironic the NDP/Greens are selling proportional representation as ‘improving’, ‘fixing’ and ‘making our democracy more democratic’ with a proposal that is inherently undemocratic and that goes with the lowest first past the post standard of 50% + 1

And a notable avoidance of any discussion of side effects and consequences of changing.

We are talking about changing the way we choose our governments from the system used since Canada became the Dominion of Canada in 1867 to….umm….. whatever it is changed to.

Considering the effects and consequences of changing our electoral system; the profound effect a change will have on the outcome of elections and government behaviour; and the potential for undesired outcomes and consequences one would think that what the government proposes we change to would be explicitly defined. However, instead of clear and explicit we have the bewildering ‘whatever’ of the NDP/Green proposal.

I suppose, given the involvement of politicians, one should not be surprised that even with a change as significant as how we choose our government it is business as usual – vague, confusing and misleading.

The NDP/Green collaboration and their supporters have been crusading around BC with the zeal of snake oil salesmen as they seek to sell people on jumping off the proverbial bridge [my mother: “would you jump off a bridge because ‘everyone else is doing it”?]  into the great unknowns of the NDP/Green proposal.

The vagueness and lack of clarity in the proposal is no doubt a benefit in selling voters on voting yes since it allows the meaning of the proposal to be interpreted in numerous different ways thereby making it easier to target the sales pitch to the audience.

Even if the language was precise you would still be buying ‘whatever’ should you vote for proportional representation because the vote will not dictate specifics but simply provide ‘direction’ to whoever writes the legislation.

And although Premier Horgan states the legislation will be written by some unspecified and undefined group of non-politicians there is nothing in the proposal preventing the NDP/Green collaboration from writing the legislation themselves.

Perhaps the most undemocratic aspect of the proposal is that the written legislation setting out the new electoral system does not require approval of even a simple majority of the voters, much less the significant proportion of voters [80 – 90%] that such a significant change demands.

While politicians and political parties may come and go, the process we use to elect them stays…….although  with proportional representation getting rid of a politician, a party or changing the government can be more complicated than with our first past the post system.

Whether the headlong rush of the NDP and Greens is the result of the tactical advantage in holding onto government and power the NDP and Greens see in proportional representation or the result of some other factor, the only way citizens can avoid being stuck with whatever the politicians eventually come up with and can have the final say in how politicians and governments are elected is to vote for No to the slipshop proposal from the NDP/Green collaboration.

I am not about to buy an undefined electoral system from politicians I wouldn’t buy a used car from.

Caveat emptor, let the buyer beware, means choosing certainty over an undefined, uncertain ‘whatever’ by voting to retain our current system by voting NO to the unsound and delusive NDP/Green proposal.

Any change to our electoral system requires discussion, exploring, understanding NOT unclear, feckless, slipshod, delusive, whatever.

I think, therefore I vote NO.