L.E. Modesitt’s The Mage-Fire War [Book 21 of the Saga of Recluce] was just published and I am waiting to get my hands on and read the last book of the trilogy that covers the story of these characters in the history of the World on which the Isle of Recluce exists.

Tuesday night [August 27, 2019] I found myself with a burning desire to read Modesitt’s ‘The Magic of Recluce’ which I have not reread in a decade or more. The book was the first Recluce novel written although, at this point in time, it is the second last book chronologically in the history of Recluce.

As happens to those of us the Universe amuses itself tormenting, I could not find any of the copies of The Magic of Recluce I own and so suffered the pain of the unrequited desire of a Reader for a book.

Wednesday morning found the desire strengthening, and as the seconds of the day ticked by it looked as if the Universe was going to be successful in inflicting another night of being denied the words relating the tale of The Magic of Recluce.

But the Universes dastardly plans of torment were seemingly foiled when I made it to Hemingway Books seconds before the doors locked and knew the clerk who accepted my assurances I needed less than 60 seconds.

When my next stop not only took care of the matter it was intended to address but also presented the opportunity to take care of another outstanding task I thought, as I headed to the library, that perhaps the Universe would not manage to be petty about my fortune in obtaining not just a copy of The Magic of Recluce, but a copy I coveted.

The library closing time of 9 PM arrived and as I stood beside my car in the parking area between the Clearbrook Library and the Abbotsford Pig Sty [AKA the AbbyPD headquarters building] the words I had not gotten out of my head and onto google drive made it clear I would be investing time in committing words to google drive in addition to the time I planned to spend savouring The Magic of Recluce.

With over 24 hours having passed since my last cup of coffee and as the drastic changes made McDonald’s coffee potable, I headed over to the nearby McDonald’s on Bourquin for coffee, fries and to peruse Wednesday’s Province newspaper.

If I am at McDonald’s sating my coffee addiction when lobby closing time arrives and I face hours of writing and reading, I take advantage of the free refill so I have a cup of fuel to begin writing/reading.

So, as I was leaving McDonald’s, I went up to the counter for a caffeine refill.

An acquaintance who had come in earlier, ordered and then come to talk to me for the past 90 minutes had his cup refilled without hassle. But the female staff member I spoke to told me she had already given me my free refill.

I stated that I had not gotten a refill from her or any other employee during my current visit to McDonald’s.

She took my cup and refilled it and I left the building heading for my car with my acquaintance chatting away beside me.

As I was about to get in the car and head off to my keyboard and The Magic of Recluce, I took a sip of the coffee and found it cold, without even a hint of warmth. When I said to my acquaintance that my coffee was cold he said his was hot. 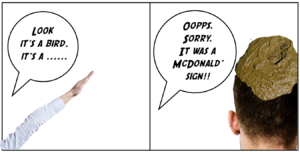 I took a deep breath and let it go. Not only were the doors now locked but, given the circumstances and human nature, the only thing returning to McDonalds was likely to result in was me added to those who are banned from the Bourquin location.

This is especially true when the customer’s statement about not having had a refill was accurate.

So I dumped the cupful of ice cold coffee on the pavement of the parking lot, put the cup and lid in a garbage container, headed to Tim Hortons for a replacement coffee before heading home to the hours of writing and reading ahead of me.

Although the words that wanted out of my head as I left the library had changed completely to words reflecting upon McDonald’s less than courteous, thoroughly  Bu_l Sh_t behaviour. 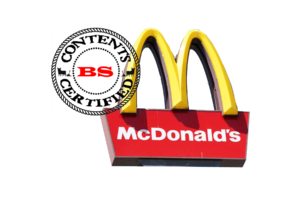