About Hurricane Dorian Donald Trump Tweeted “This was the originally projected path of the Hurricane in its early stages. As you can see, almost all models predicted it to go through Florida also hitting Georgia and Alabama. I accept the Fake News apologies!”

What a shame – yes, how stupid! –
to decide before knowing the facts.
Proverbs 18:13

Just how pervasive does the Culture of Ignorance have to be that Trump could be elected President of the USA when he cannot tell the difference between the actual prediction issued by National Oceanic and Atmospheric Administration for Hurricane Dorian and a tool used by National Oceanic and Atmospheric Administration to assess their confidence in the accuracy of any prediction of Dorian’s path?

And what does it say about the level if ignorance embraced by the Culture of Ignorance when you can be elected President of the USA without the capacity to grasp the difference between the predictions issued by the National Oceanic and Atmospheric Administration about a hurricane and ‘Fake News’?

Donald Trump’s failure to correct the misinformation he tweeted when the facts revealed it was misinformation shows the US President is an adherent of two of the cornerstones of the Culture of Ignorance: vincible ignorance [lack of knowledge that a person is capable of acquiring by making an effort] and invincible ignorance [insisting on one’s position in the face of facts that contradict one’s position]. 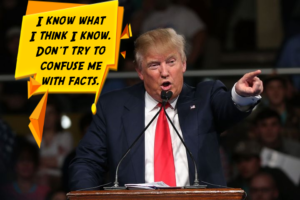 Considering the frequency with which President Trump assaults reality by citing false facts he may want to practice the wisdom of Maurice Switzer in his book “Mrs. Goose, Her Book.” 1

It is better to remain silent at the risk of being thought a fool,
than to talk and remove all doubt of it.