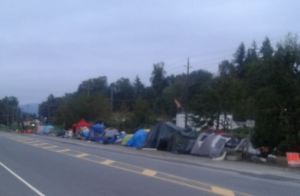 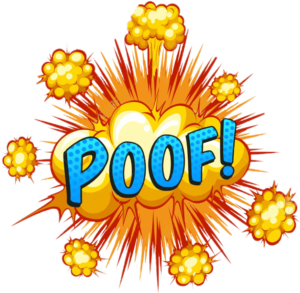 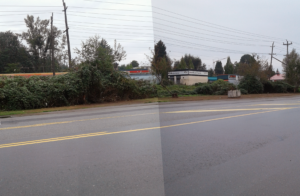 Driving past where the homeless camp had sprouted Gladys Avenue I see that – lo and behold – the tents of the homeless had vanished leaving nothing but bare earth.

Inquiries of the homeless revealed that the city had not come up with either a plan or viable alternative but simply ordered the homeless to leave that location.

That Abbotsford allowed the homeless to remain during summer but with the return of the rains, with winter fast approaching and the absence – at this time – of the extreme winter weather services available to the homeless in prior years reflects a disturbing lack of ethics and a disregard for reality.

A mayor and council apparently unable to grasp that if you move people from point A those people have no option but to move to point B; or recognize there is no strange twilight zone the homeless can move into.

But then this is a mayor and council that doesn’t understand that an action plan must contain an action; or that accomplishing anything useful requires a clearly defined goal, the actions necessary to achieve that goal and the timetable of when the actions will be accomplished.

A ayor and council who spent years and hundreds of thousands of dollars designing a coordinated intake system to refer the homeless to the services they need without it occurring to said mayor and council to ensure the services needed by the homeless to attain wellness were in place to refer them to. As a result Abbotsford’s touted intake system simply provides a more efficient recycling from homelessness into treatment and/or housing shortly thereaftere back to addiction and homelessness.

A mayor and council who have demonstrated a lack a basic comprehension of addition and subtraction.

Exactly what a negative homeless person looks like I don’t know, but I do know that when basic mathematics shows a negative number of homeless on the streets you need to reevaluate your beliefs, assumptions and knowledge.

As Abbotsford’s homeless task force was working on producing the no action Abbotsford’s Homeless Action Plan [a fine example of the nonsense speak abilities of Anglo-Saxon speech] a citizen of Abbotsford came to address the task force. She had not given any real thought to homelessness in Abbotsford until city council failed to support the Abbotsford Community Services plan to build supportive housing. However council’s failure caused her to feel that, as a citizen of Abbotsford, it was her responsibility to ensure she was informed about an important issue such as homelessness. She had come to the task force to share the knowledge she had gained so the task force could create an action plan that would be effective in addressing homelessness.

She had found there was only one approach that had proved to be effective in dealing with homelessness, but that approach had repeatedly demonstrated that it was effective in helping the homeless, mentally ill and those with substance abuse problems to regain control of their lives.

In order to make sure that the task force would be able to incorporate this effective approach into Abbotsford’s Homeless Action plan she had brought all the references needed for the task force to research this approach.

There was a five year five city research study of that appoach – Housing First – funded by the Canadian government and conducted by the Mental Health Commission of Canada.

The Burnaby presentation of the results of the study, the toolbox created to provide the services needed by those participating in the program and the opportunity to speak with those in charge of the study and some of those providing the services to clients was unattended by the City of Abbotsford, or any other municipal governments or the government of BC

When the research study, the toolbox created and that the person responsible for running the research study was available to consult on creating a housing first plan in Abbotsford was communicated to Abbotsford’s mayor and members of council……………nada, zip, zilch, zero.

Apparently the only approach to prove effective, an effectiveness demonstrated over many studies, does not meet the criteria – whatever they are – of Abbotsford’s mayor and council for addressing homelessness in Abbotsford.